In Dane County, our trash is doing more than double duty. When garbage in a landfill breaks down, it produces biogas. About 50% of that is methane— a greenhouse gas that has a global warming potential 84 times that of carbon dioxide over a 20-year period.

Still, if cleaned and compressed into renewable natural gas that landfill methane emits less carbon dioxide than other fossil fuels, making it preferable to gasoline or diesel as a vehicle fuel. Dane County has installed a system at its landfill that converts landfill biogas to renewable natural gas (RNG). The first of its kind in the nation, a $28 million facility is estimated to generate enough revenue from the facility to payback the cost of the project in just a few years.

The facility displaces 4,000,000 gallons of fossil fuels annually. Because RNG has a lower carbon footprint, this is equivalent to taking 4,800 cars off the road.

The RNG produced at the landfill will be injected into an interstate pipeline. Through a partnership with Dane County, LaCrosse-based Kwik Trip will also dispense RNG from the pipeline to sell it at the company’s growing list of CNG fueling stations, and power vehicles locally and across the Midwest. 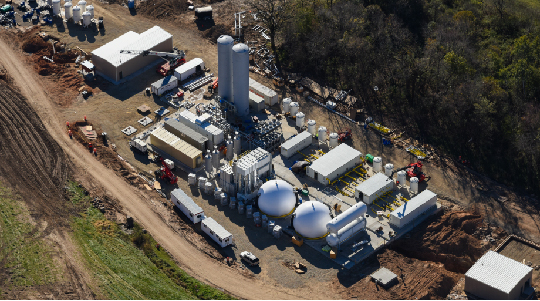 Dane County’s new facility also has a biogas offloading station to allow other biogas producers, like manure digesters, to inject their gas into the pipeline. Digesters reduce greenhouse gas emissions by collecting methane that would otherwise be emitted to the atmosphere.

They also help farms manage manure more responsibly, which reduces harmful runoff to lakes and streams. This offloading station is expected to create an economic incentive for owners of “Cow Power” facilities in the area to convert their operations to vehicle fuel production, spurring development of more digesters in our area and increasing Dane County’s lakes clean-up efforts.