Partnering on Jobs, Clean Energy:
SunPeak and the Urban League of Greater Madison 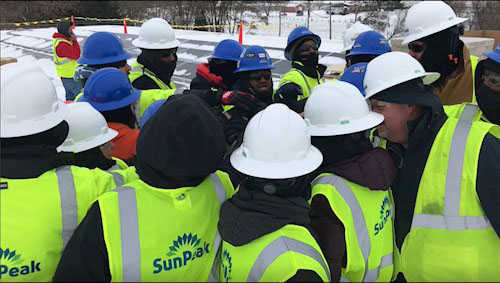 This lets me know I’m giving back… I’m able to take care of my responsibilities as a man.
Cornelius Perkins, Urban League START graduate / Solar Installer at SunPeak

Dane County convened the Dane County Council on Climate Change to create this Climate Action Plan. Little did we expect that Council members would partner together to reduce emissions and increase equity before the plan was even finished—but that is exactly what happened.

Learn more about the SunPeak - Urban League partnership via this video.

At an early Climate Council meeting Chad Sorenson, the CEO of SunPeak, a Madison-based firm that designs and installs PV systems for businesses around the nation, met the Director of Workforce Development Services at the Urban League. At the meeting Chad learned about the Urban League’s Skilled Trades Apprenticeship Readiness Training (START) program, which works with underemployed and formerly incarcerated individuals, preparing them for careers in the skilled trades.

Chad recognized that the START graduates could be great entry-level staff at SunPeak. So SunPeak’s Director of Project Management, Casey Joyce, started working with the Urban League, participating in graduate interviews and doing guest presentations to START students to talk about the solar industry.

Terry Birts, the Construction Manager at the Urban League, coordinates the START program and notes “We met with Chad, the owner of SunPeak, to talk about how we could help him gain employees, good employees, that would be work-ready. They wouldn’t be seasoned, but they’re eager and ready to start a job, to start a career. We look to put people into careers.” Birts adds that the START participants are eager to get their lives on track, to earn a wage and start saving for a house. The Urban League appreciates SunPeak’s role in their program.

“When you have a collaborate like we do with SunPeak, and other businesses see that, other employers see ‘Hey they’re getting good employees’ and ‘How do we find good employees?’” Birts explains.

The partnership has resulted in SunPeak hiring about a dozen START graduates from the Urban League. Everyone is excited about the results.

Cornelius Perkins, a solar installer at SunPeak and START graduate, is enthusiastic about the program and about his future at SunPeak. Referring to Casey and SunPeak, Perkins says:

The partnership benefits SunPeak, too, giving them access to job-ready entry-level employees who receive ongoing mentor support from the Urban League.

“I like to think of this as a perfect example of how we can do well by doing good. And that is really rewarding, not only for me but for everybody that works here,” says Joyce.

“We benefit greatly from all the Urban League employees,” Joyce adds.