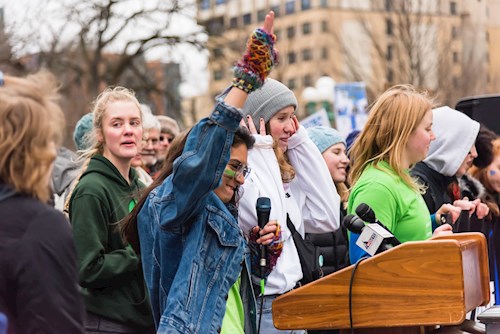 Stephanie Salgado, 18, a student at Memorial High School, waited her turn to speak at the youth-led climate rally in Madison.

“I felt my heart pounding. I felt my whole body shivering, yet I held the microphone tight knowing that what I was about to say was right. I felt empowered, despite the hours that had gone by screaming through the day’s climate fight.  Little did I know that as I spoke truth to power that my words would have such might.  Reaching the podium along with my friend Sophie Guthier, allowed me to absorb the unbelievable sight. Ending with spoken word was the trembling feeling that was not letting me sleep at night.”  --Stephanie Salgado

On March 15, 2019 hundreds of students from the Madison area and around Wisconsin came out to take over the streets with leaders from the Youth Climate Action Team, to take back what belonged to them. Many of them, involved in their first protest, were afraid, but Stephanie was trained. The determination was daunting after many months of contemplating the scary reality of the future of the planet she was inheriting.  A few months later she was surprised by a phone call she received.

With that call she was appointed by both Lieutenant Governor Mandela Barnes and Governor Tony Evers to be a member of the state’s Climate Change Task Force. The mission of the Climate Change Task Force is to advise the Governor on the most pragmatic ways to mitigate the effects of climate change. Stephanie was at first questioning her potential and her ability as UW Madison freshman. However, soon after she realized that this isn’t about her. It is about her community’s goals. It is about giving a voice to the ones that have been silenced in the past. It is about representing the collective action of her community.

“I may have once been afraid to speak up due to my lack of enunciation and pronunciation as an immigrant, but nowadays, more than ever, I am anxiously waiting for my next opportunity to speak up and speak out for climate justice. “  -- Stephanie Salgado